Other notable book-to-graphic-novel adaptations which have been released recently include:

Harper Lee’s To Kill a Mockingbird, adapted and illustrated by Fred Fordham.  A realistically drawn adaptation of the classic novel of injustice and racial tension, appropriate for teen or adult collections. 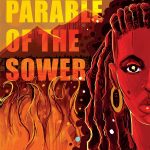 Octavia Butler’s Parable of the Sower, adapted by Damian Duffy with art by John Jennings, the same team which adapted Kindred. A near-future dystopia about an America in collapse. Lauren, a teenager in water-starved California, lives in the relative safety and comfort of a gated community – but when the gates are breached, she and the survivors must find a new place to live.  This is a great choice for teen or adult collections.

Scott Fitzgerald’s The Great Gatsby, adapted by Fred Fordham with illustrations by Aya Morton. Wasn’t this mentioned in the article? No, this is a different one – there are dueling Gatsbies now. Blame it on the book coming into the public domain.  My instinct is that this version, with its light, watercolor art conveying the feel of a grey New England day, would appeal more to adults – but given how often the book is taught in schools, it could be useful for teen readers, too.

Eoin Colfer’s Artemis Fowl, adapted by Michael Moreci and illustrated by Stephen Gilpin.  Not the first time Colfer’s “Die Hard with fairies” novel has been adapted, this new version came out alongside the Disney movie and is a little more true to the characters than the previous series was (particularly Holly Short, now properly rendered with her brown skin and short auburn hair.)  It’s certainly a lot more accurate than the movie itself!  This skews a bit younger than the other books I’m listing, and would be appropriate for either middle grade or young adult collections.

H.G. Wells’ The Island of Dr. Moreau, adapted by Ted Adams with art by Gabriel Rodriguez.  Initially released over a couple of large-sized monthly comics, there’s less story then there initially appears in this tome – half the pages are taken up by full reproductions of Rodriguez’ initial pencils.  It’s justified, though, because the artwork in this volume is simply gorgeous.  Purists might complain that there have been a few changes to the story – there’s a different protagonist, and the ending is more positive than that of the original book – but the art is a thing of beauty.  Don’t miss this one.  For teen or adult collections.