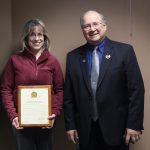 The special recognition was presented to Sepnafski on behalf of the Wisconsin Legislature by Senator Jerry Petrowski
(R-29th District) at the WVLS Board of Trustees meeting on Saturday, November 16.  It was signed by Petrowski, Governor Tony Evers and Assembly Representatives Pat Snyder (R-85th District) and John Spiros (R-86th District). Petrowski also gave Sepnafski an American flag that was flown over the Wisconsin State Capitol in her honor.

The citation notes Sepnafski’s dedication and devotion to making Wisconsin public libraries accessible and responsive to the needs of all residents, particularly to WVLS member libraries in Clark, Forest, Langlade, Lincoln, Marathon, Oneida and Taylor Counties. It states that Sepnafski and the entire WVLS team has “promoted a bold vision for the future of library service in which innovation, collaboration, and high standards of excellence are key components.”

Sepnafski was hired by the Wisconsin Valley Library Service (WVLS) in a part-time role in 1981, that consisted of mostly clerical work. 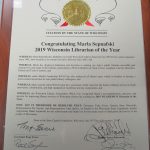 Eventually, Sepnafski took on more responsibilities within the organization, and earned her Master’s of Library Science in 1991. Following a national search, Sepnafski became WVLS executive director in 2007.

Under Sepnafski’s leadership, WVLS has evolved and responded as changes in society, digital resources, and information technology created new demands and opportunities in libraries. She was named Librarian of the Year in October at the WLA Annual Conference.